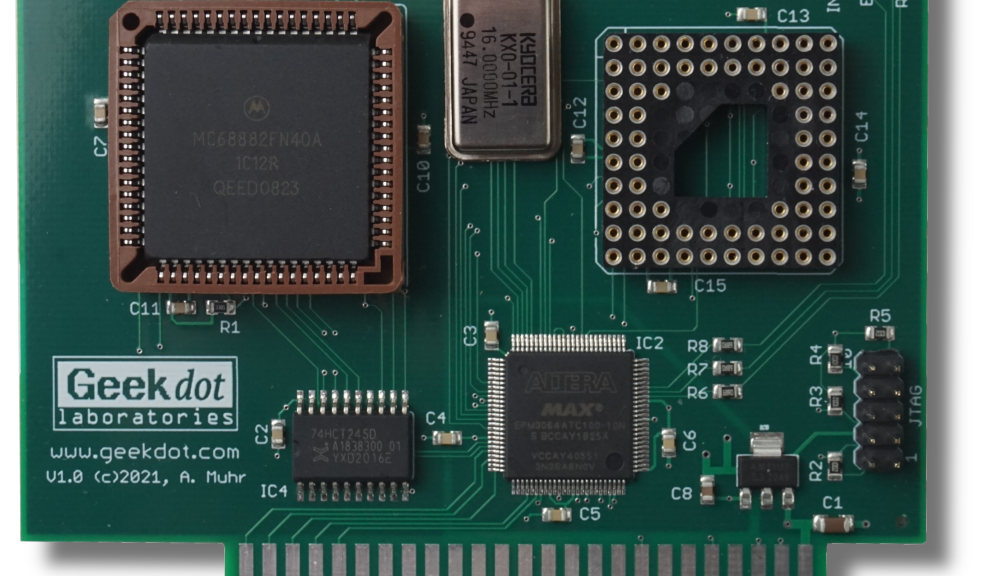 The NumberCruncher Reloaded is a peripheral card for the Apple II series that features a math co-processor, often also called a Floating Point Unit (FPU) which is specialized on, well, floating point calculations. Doing so, it is much, much faster than any 6502 or 65c816 CPU ever will be.

The “Reloaded” in its name hints towards the fact that this is a reboot of an already existing card. To make writing/reading easier, NumberCruncher Reloaded might be shortened to ‘NC-R’ further down this page…
In 1988, there was the Floating Point Engine (FPE) created by Innovative Systems (‘iS’ for short).
Read more about those in my separate post over here.

While it was a great idea, it wasn’t the most stable design – but it laid the foundation especially and most importantly for the software we’re still using today.
Due to the FPE’s issues there was quite some displeasure in the user-ship and in 1990 a German company called Alternative Systems announced the Number Cruncher, an ‘overhaul’ of the original design – here’s their newsgroup announcement:

“The FPE is suffering from a major problem, namely the coproc is crashing internally and has to be reset in software. This happens in a non-deterministic way, and software written for that engineering junk must be adapted to that.
The Number Cruncher is compatible with the FPE but is actually what the FPE was supposed to be – a math coproc that works. It performs very well.”

Over the years the FPE as well as the NC faded in unobtanium. Because they were cool, and I love processors of all kinds it was time to revive the Number Cruncher.

If you have read the above mentioned post about the the FPE you learned that the predecessors were built around the first, very obsolete and proprietary FPGA, a 555 timer and the 68881 FPU. All these parts would have a Facebook status of ‘#complicated’ today and needed to be replaced.

Logic: The Xilinx XC2064 FPGA was replaced by something more recent like my universal 5V-tolerant weapon of choice, the Altera EPM3064 (aka MAX3000). That little fellow has enough logical gates and using the 100-pin version sufficient I/O-pins are available even when using ISP. The timer for blinking the busy-LED went into this, too.

FPU: There are still some 68881 around, but the 68882 is much easier to find  and both are cheaper in PLCC packaging than ceramic PGAs as of today. But as future NC-R owners might already own one or the other, so we’ll go with… both. Yes – to offer maximum flexibility, you can use either Pin-Grid-Array or PLCC packages.
Physical differences aside, the original FPE/NC did not work with the 68882 – the NumberCruncher Reloaded does.

To sum it up the NumberCruncher Reloaded was improved in many aspects to make it much more usable in the 21st century:

In contrast to my T2A2 Transputer Link-Adapter, there is already some software available for the NC-R.

Still, based on the original Innovative Systems disk (updated to the latest releases),  it provides everything you need to start:

In the FPE.IIGS folder you will find:

The NCR.INIT requires some extra explanation because it is a very elegant solution to put the NC-R to use:

This init redirects every Standard Apple Numerics Environment™ (SANE) floating-point call to the NumberCruncher Reloaded – so as long an application using the SANE library calls it will be accelerated. All you need is to copy the INIT from the NCR.INIT/Init folder into your SYSTEM folder. 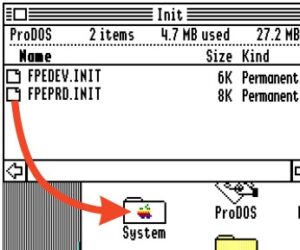 The INIT will automatically detect your NC-R in any slot (if installed) and will nicely show so during boot-up like so:

As said before in the FPE.6502 folder you will find all tools for the Apple II.

That also has a SANE patch which can be found in TOOLSET:FPE8.TOOLSET.  This toolset uses the following calls:

The APPLEWORKS.FPE8 folder contains the Appleworks 2.x modification. To modify your copy of Appleworks, just run FPE.SYSTEM from the root folder and answer the questions. The modified code will automatically access the FPE whenever a floating point operation is required.

In the FPEfractal folder you will find Zoombaya (and other fractal programs, all by Glen Brendon).
This is my currently favorite tool for benchmarking and testing.
It’s written in Applesoft BASIC(!) and uses Glens cool so-called ProCMD module which sets up an interface between Applesoft programs. The downside is, that it uses some 65816/65802 specific commands. So running it on a 6502 CPU will lead to a crash. 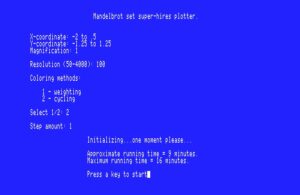 Yes, there actually were some applications making use of an FPU accelerator, eg. function plotter, math tools like a poor man’s Mathematica etc. – all written for GS/OS. Sorry Apple II users… hopefully other A2 enthusiasts start writing programs using the NC-R, too.
I prepared an dedicated post about them to make this one as short as possible:
So if you’ looking for some ‘food’ for your NC-R head over to the NumberCruncher Reloaded Software post.

The ever growing FAQ and programming details were put into a post of its own. So you’re kindly invited to follow this link if you have more specific questions…

Still, we’re all hackers of some sort, so you might ask yourself “What’s the fastest option?” or “Can I make it even faster?”.
Well, while the 68882 is up to 30% faster than the 68881 due to its capability to execute commands in parallel this mostly doesn’t matter in the case of the NumberCruncher Reloaded.

As mentioned in the feature-list, thanks to protocol optimizations the NumberCruncher Reloaded is already a tiny bit (~4%) faster than the original at the same clock-speed, but more important is that it “saturates” later.
This means while with the FPE/NC you don’t see any improvements beyond 12MHz the NumberCruncher Reloaded still benefits from a faster clock up to 16MHz.

From there it does not make much sense as the Apple II bus, clocked at 1MHz, is the limiting factor here.

Using the ‘Zoombaya Mandelbrot’ program included on the Tools floppy disk on a TransWarp GS @ 10MHz gives these calculation times:

The speed of your Apple computer very much plays into the equation, too. It handles all the writing/reading and of course the endian conversion.
Here’s an NC-R clocked at the default 16MHz installed in an Apple IIgs running the same Mandelbrot at different clocking:

The TransWarp GS seems to saturate pretty early. Most likely because it’s running the code completely out of its cache.

Of course you want one now 😉 The first batch of 35 cards is sold out. That said…
I’m working on a 2nd run of cards right now. Output is slow as I have to hand-solder the 100pin TQFP CPLD (due to current chip-shortage). On the plus-side, the PCB is ENIG gold plated now.
I’m slowly building & testing them when time allows – just ask if you’re interested in one. 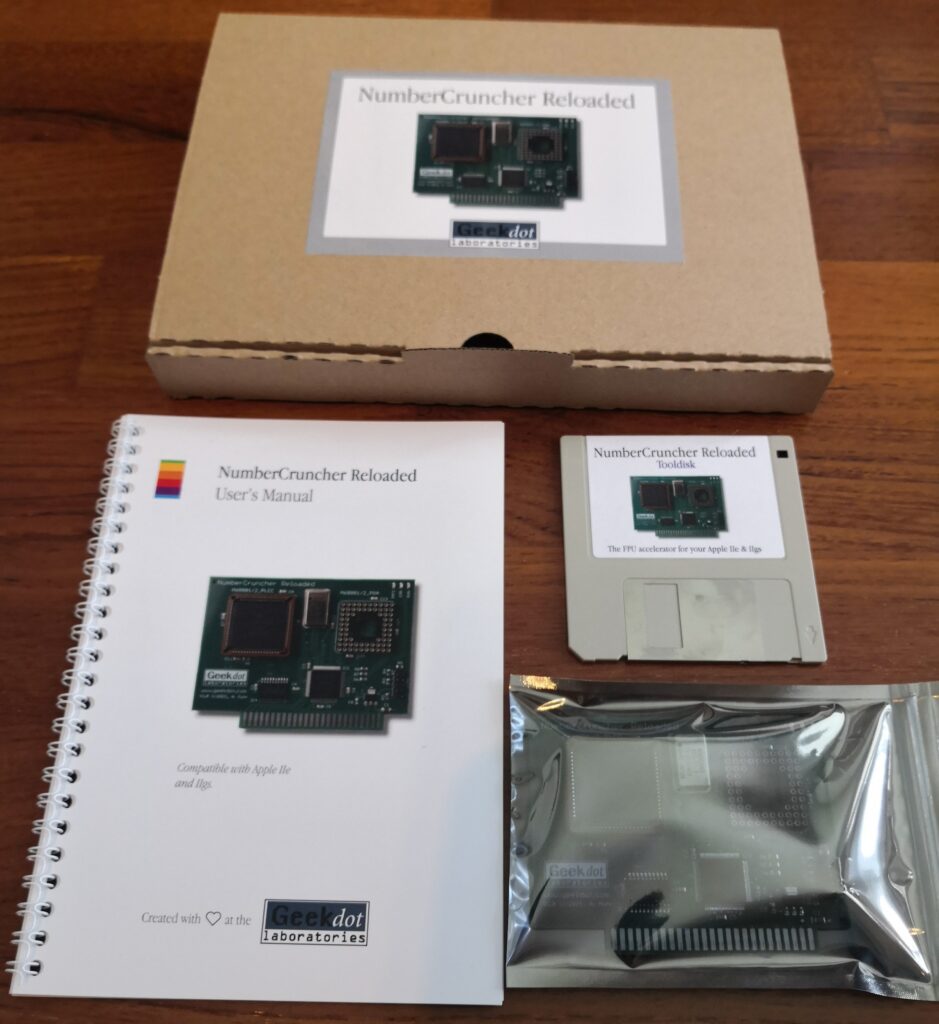 Ahhh, look at those beauties!The NumberCruncher Reloaded comes in a nice, eco-friendly box with a high quality, glossy spiral-bound manual and an 800k ProDos floppy.

You can choose from 3 different configurations:

It’s 2021 and the world is  suffering from the COVID19 pandemic. Shipping services are still providing very limited services.
I am shipping from Germany as trackable package only. Also I chose the box dimensions that way, that it snugly fits into DHLs shipping categories. In that case, I will wrap the original box in strong wrapping paper. It weights 250 grams (that’s 0.55lbs or 8.8oz or 0.039 stone – no idea what’s that converted to Ningi 😉 )
Alternatively I can ship the box in an extra box for better protection against “Crazy delivery men”. That will increase the size and thus the shipping price.

Shipping into the European Union is relatively affordable with 9€ – if you want a “box around the box” it’ll be 14€
(Just in case, for Germany it’ll be 6€ as “Paket”)

Australia is even worse. 13€ for the wrapped box, 20€ for box-in-box or insane 68€ for priority shipping.

That said, the priority shipping will be fine for 5kg (11lbs, i.e. good for ~15 NC-Rs plus padding), so if you can organize a group-buy, I’m more than happy to support you.

Because of bad experiences in the past, this is pre-paid only.
Again: This is a hobby project made for fun & the community, I’m not a business.
I accept PayPal (for friends) and bank-transfer.
To order, send a mail to ncr@geekdot.com stating

I will then send you all the details for paying & shipping. As soon I received the money, I will ship and send you the tracking information.
If you want to arrange a group-buy I can reserve a certain amount of NC-Rs for a max of 5 days. After that they will be sold on-demand.