This is yet another i860 accelerator card – this time from good ol’ blighty: The Myriad DASH!860 (I’ll call it the Dash from here on) was made by Myriad Solutions Ltd. from Cambridge.

Here’s the copyright in detail:

What I’ve got is actually a double “sandwich” card, i.e.

Mhh, this setup very much reminds me of the SPEA Fire, which uses the same core parts but thanks to its higher SMD integration manages to squeeze everything onto one ISA board.

But let’s start in the good old GeekDot tradition having a closer look at each of the cards.

Here’s the left side of the Dash: 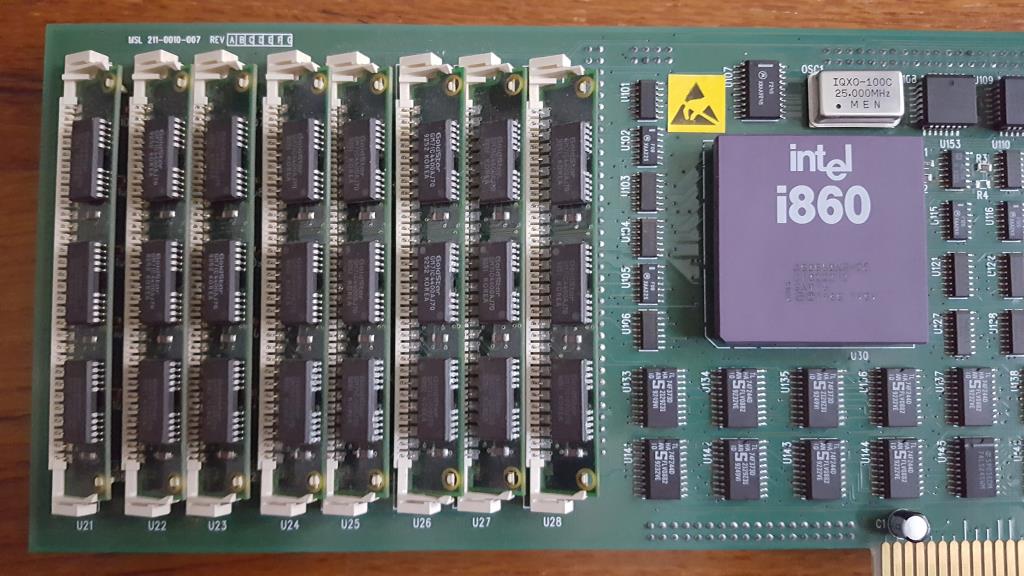 Having seen the other i860 accelerator cards, this isn’t that much different: The 64bit wide memory interface of the i860 is fed by 8 SIMM slots, each containing 1MB of RAM.
SMD parts prove that this card is a more modern design…

…while looking at the right side of the Dash shows, that its design is somewhat between the worlds: 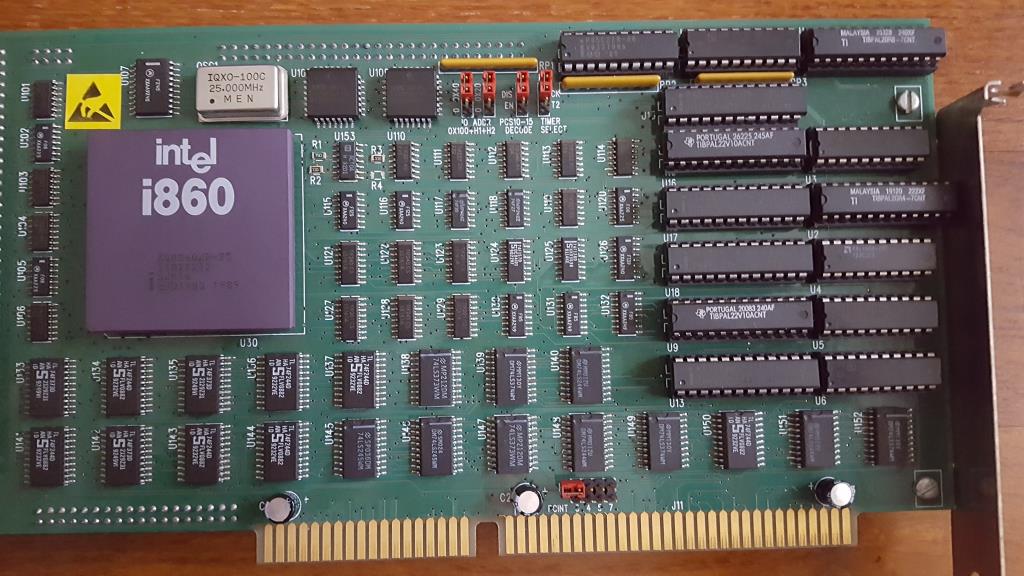 Lots of DIL PALs has been used. Also the huge array of 8bit latches and buffers would have probably been replaced by 16bit versions later in time.
The most interesting fact in my eyes is the choice of the CPU… why did they pick the 25MHz model? The quality check on the back says 1993! In that time, 40MHz models where broadly available – maybe this was a cost reduced version of the Dash? Some sources on the web mention a 40MHz version at least.

The long pin-rows on the top- and bottom-edge as well as vertically next to the rightmost SIMM slot are the data/address lines exported to the sandwiched graphics card, called…

Let’s start with the left side of this card: 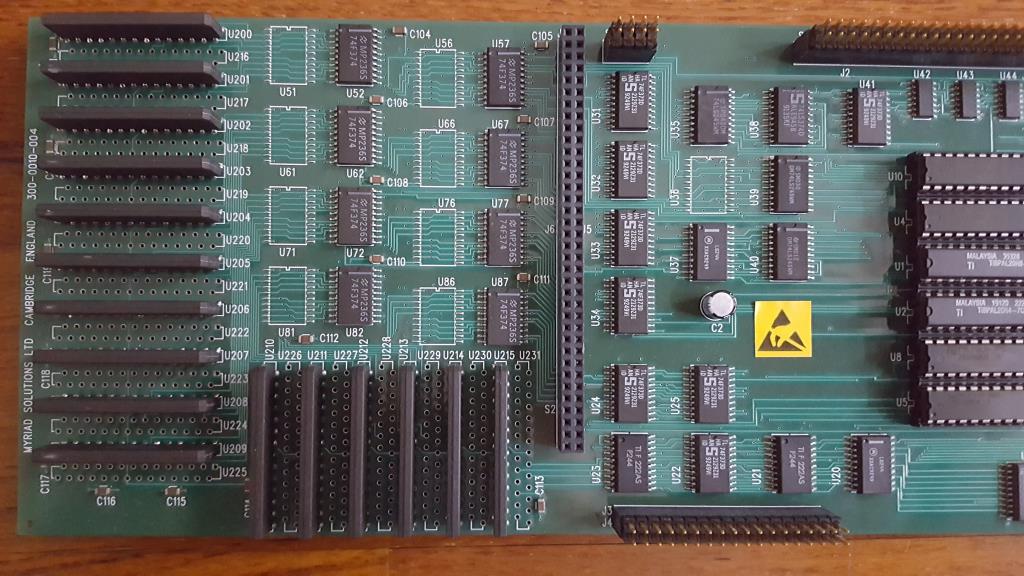 Most prominent are the 16 VRAM memory ICs in ZIP package. They’re 1Mbit, so we’re looking at a whopping 2MB here.
Looking closer you’ll spot there’s room for another 16 ZIP ICs and more buffers – so the video memory can be upgraded to 4MB fairly easy (adding some more flipflops, too).
The connectors to the Dash card can be identified quite good here, too. 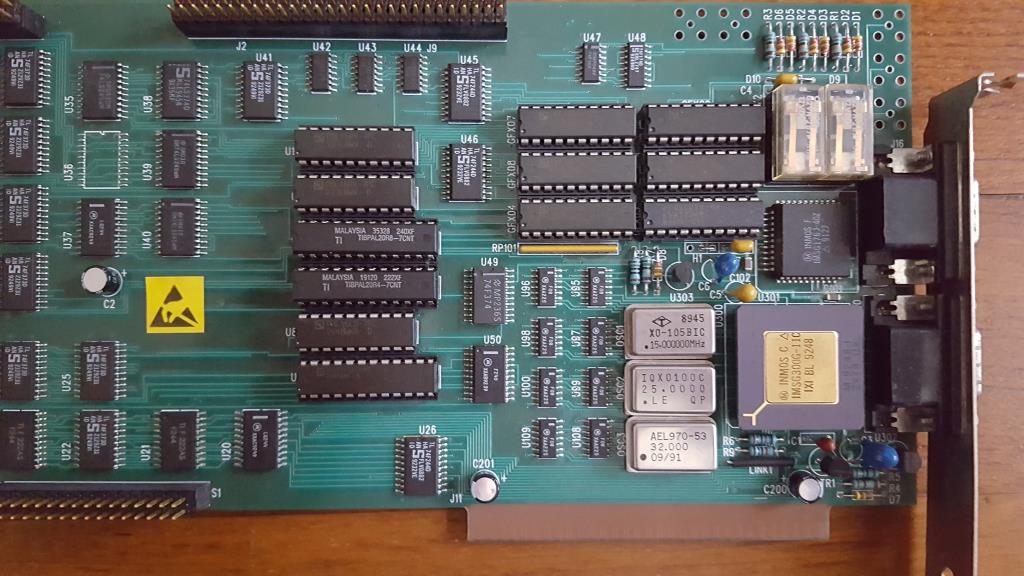 On the right side of the ShadeMASTER there are a lot of PALs again – like with the DASH!860. The golden IC is an INMOS G300 graphics controller and the smaller black PLCC chip is an INMOS G176 CLUT. This one has a 6bit DAC which -theoretically- limits the ShadeMASTER to a max. of 262,144 colors (18bit). With its 2MB it could display 1024×786@16bit, or 1280×1024@8bit. With 4MB that resolution would even possible at 24bit true color…
The two transparent thingies in the top-right corner are relays to switch the video signal, i.e. there are two video (VGA) connectors at the cards edge. One 9pin input for looping in the PCs VGA signal and a 15pin output which is normally looped-through.

No signals are used on the 8bit ISA slot connector. It’s just for fixing the card in place and power-supply.

While the DASH!860 seemed to be sold separately as a “general purpose application accelerator” the combination of both cards was mainly targeted at the medical 3D data visualization market.
My cards came from the Bio-Rad ThruView PLUS package which included the Dash/ShadeMASTER combo with the ThruView software.
I have a copy of the software .
See the next chapter handling that software.

What’s more important, and IMHO the most exciting fact about the Dash is the OS they run on it:
They called it XNIX. Yeah, that sounds very UNIXish, doesn’t it. A quick inspection of the kernal file shows its a i860 COFF binary and sports many POSIX calls… I was instantly hooked 😯 .

This is the parameter screen of the loader called “x.exe“: 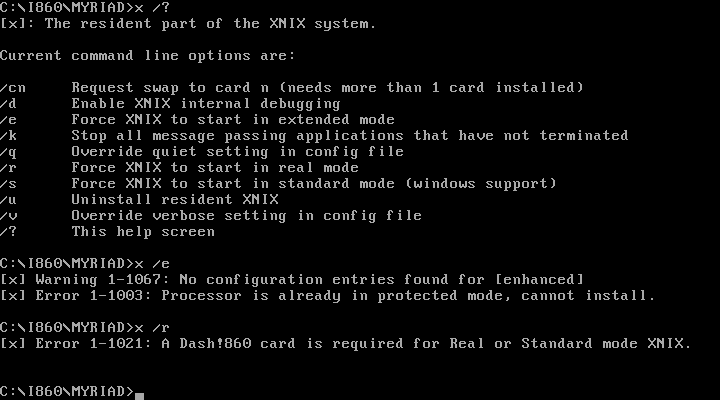 Obviously, there are different modes to run it, depending the mode DOS is running in. As you can see, “/e” forces the enhanced-mode, while “/r” does the same with real-mode.
So either

A) you boot your DOS into real-mode by un-commenting the
device = emm386.sys
line. But leave himem.sys in there. (This will provide XMS RAM access, which is needed by XNIX)

B) Try running “X.EXE” with the “/r” switch.
It still might not work, as I found this line in the binary-code:
“A DASH!860 E or J card is required for ‘real mode’ operation” – most likely a Revision Code.

The most interesting and useful switch is “/d” to get the 2 pages of debug output:

This gives you some crucial information:

In [standard] mode, I get this screen afterwards:

That’s a bit puzzling, as it seems to not using XMS RAM.
Also, this shows an evil behavior: “X.EXE” will wipe your “\tmp” and “\usr\tmp” folder… unasked. Yikes!  👿

For now, I have no clear idea, how to load an i860 binary to XNIX. In another paper I found these lines:
“The i860 runs a Unix like operating system called Xnix. This is a Terminate and Stay Resident utility which allows many standard Unix applications to be executed on the i860 whilst the PC is running MSDOS. Xnix sleeps until a Unix development tool or the i860 requires servicing whereupon it wakes up and performs the required service.”

This hints towards a library to be compiled into a DOS executable, which calls XNIX kernel services.
I will have to disassemble some of the ThruView binaries and see, if thera are some calls in there which might support that theory (See the ShadeMASTER chapter below).

XNIX has a central config file. Having a look into it, it shows this:

The called binaries are 66% clear yet:

But going through the kernel binary’s strings, there’s much more to configure:

Pretty clear, aren’t they? DOS enhanced/real-mode setting and a section valid for both. Then there are plenty keys to fiddle around with:

Not an elegant way using absolute paths and hiding trivial calls in an .EXE file, but getting over it, this helps to understand the start process in further investigations.

The ShadeMASTER card uses a config-file itself, the provided one is called “mode” and contains:

Many of these keys are very common with most INMOS G3xx devices e.g. the IMS B020. 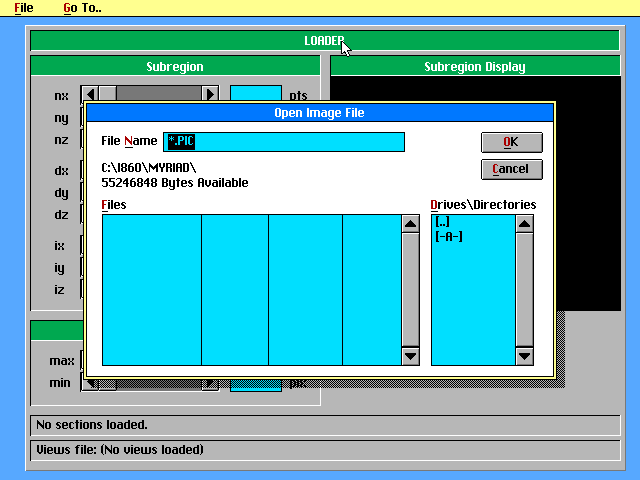