Kerberos is the machine I’ve specifically built for hosting all 3 DSM860 cards I own.
The name was chosen because the hell-hound Kerberos (Latin ‘Cerberus’, Greek ‘Κέρβερος’) is mostly depicted with three heads and the Greek myths offer innumerable possibilities for a nice g[r]eek name space 😉

The quest for the right motherboard was not easy. It should be small, still featuring as many EISA slots as possible. In the end it became a Gigabyte GA-486SA having some quite unique features for its time:

Because it was clear I will use-up 6 slots just for the 3 DSM860 cards (being sandwiched boards) I wanted to fill the remaining 2 slots as clever as possible.
After another year (!) of searching I was able to get my greedy little hands onto a Western Digital ‘Ports’o’Call‘ Vesa-Local card. This is a rare do-it-all card saving lots of slots, specifically:

In a sentence: Everything a basic system needs to work! The remaining slot was planned for a NIC making the system complete.
Because I was expecting quite some heat coming from the three i860 I’ve opted for a desktop case so that the heat can easily dissipate through the open casing – also I was prepared for lots of plugging and unplugging of cards, jumpers etc. which is much easier with a desktop case.

Golden Rule #1 of hardware fiddling: One step after the other!

So before filling the system up to its rim, I started with just one DSM860. It quickly became clear that there was no way in using the ports’o’call’s WD90c31 as the server running on the DSMs does only support certain VGA cards (if you like to have graphic output), namely some very obsolete, non-standard Genoa cards…and in its latest version: Good old ET4000!

So the nice ports’o’call had to make place for a standard multi-IO controller and the 2nd slot was used for an ET4000. That setup worked quite nicely!
After the last DSM860/32 board was fixed, I was ready to “stuff that turkey”.

One card after the other went into the slots – that’s what I call a crowded house:

As the animation above is not the highest quality (file size!), here are some more shots… 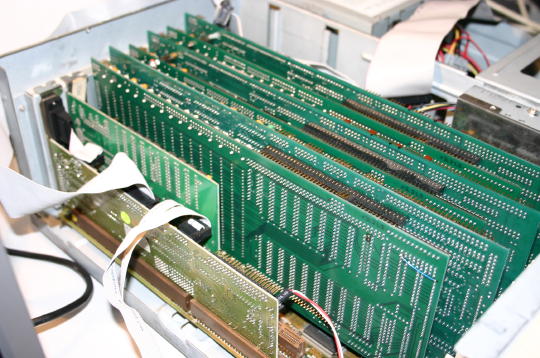 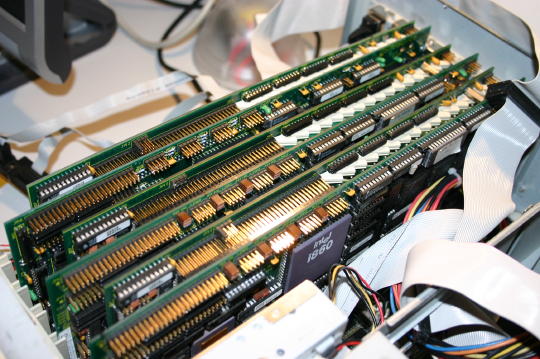 Finally some of Kerberos facts: