This is my very first (presentable) Webpage from 1995. To keep the original style and navigation, I’ve put it into an iframe…[which might not work if you’re surfing this page using https].

Because it was “optimized” for 640×480 back then, that’s what it looks like now 😉 And because I had a total of 1MB (yes, one megabyte) webspace in those days, everything was squeezed down to the minimum, which explains the small and grainy images. Still, in the hey-days of Newton “Newton Secrets – Secret Newtons” got quite an amount of traffic.
I just found the original photos -on paper, you know- and will scan them again in a better resolution… if I find the extra time.

A bit of historical background

In about 1994 I totally fell for the Apple Newton. Yeah, one of those early adopter moments… again. After drooling over an Newton 100 at CeBit for two days I bought my 120 the very next year and proudly carried the nearly 500 grams with me every day.
I dived into the NTK (Newton Tool Kit) and learned Newton Script to write my own Programs (“App” wasn’t a proper word yet).

Fate stroke, when I went to San Francisco in 1997 for a year taking the chance to work as an intern at a Web/PM-Agency. The 2nd day I figured out that my bosses , Tony Espinoza and James Joaquin were  original Newton Team members, been in charge for the Dev tools etc. Because they just left Apple (the were in deep s**t back then) I was probably the only Apple/Newton fan between hard-core PalmPilot users 😉
Still I got a signed copy of “Defying Gravity”  and a quick look into his closet full of prototypes 😮 This is where the pictures on my page came from.
We also visited #1 Infinite Loop (Mind the old [soon new again] logo) now and then… 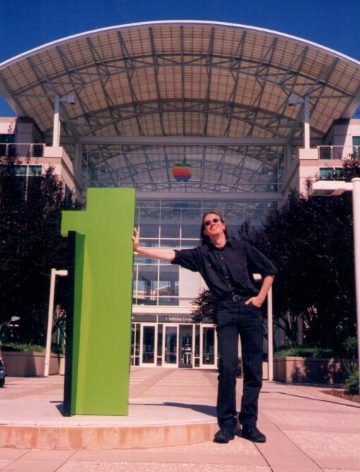 and the booming campus of Netscape. Erm, who? 😉 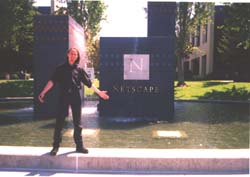